The Exchange is located in the Historic Goshen Theater Block in downtown Goshen. At 212 South Main Street we are the epicenter of many First Fridays and community events.  Ten restaurants within two blocks, close to the Chamber of Commerce, City Hall, Police Station. 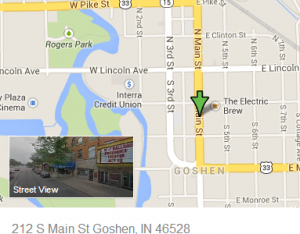 The Exchange, 212 S. Main Street in downtown Goshen, takes its name from two sources, the first representing the collaborative nature of the offices with large public areas, and the second tied to The Commercial Exchange.

The collaborative side of The Exchange offers members four secure suites that can each house three or more people in a setting that is comfortable and modern, yet private and secure when needed, and with casual collaborative space including a coffee and sitting area, conference room, storage areas, and modern restrooms.  Among the striking features are the large windows facing onto Main Street in the two front suites.  The layout makes two of the suites suitable for sharing between several individuals. 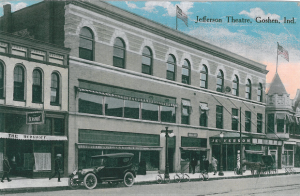 The historic aspect of The Exchange tracks its connection a December 1907 article in the Goshen Daily News that proclaims “Exchange Plans for a New Home”.  The article tells how the Commercial Exchange, “attending physician to the city’s health”, is looking at a permanent location.  “The third floor of the newly constructed Sanders and Hay Block in which the New Jefferson theater is situated, is chosen as the site of new quarters for the Exchange.  This part of the elegant building was originally intended for a club or lodge room and parlors and the place is so adapted to the use of the Exchange that the committee after investigation recommended that a deal be consummated whereby these rooms be secured for the club rooms of the body.”

While the third floor of the building has been closed down for more than 70 years, the first and second floors have been remodeled several times since serving as a furniture company and funeral directors.  The street level offices are occupied by Soapy Gnome and Cressy & Everett Real Estate.  The second floor once housed a furnished model cottage for the Smith-Clark Company and was remodeled in the 1960s as offices for Oaklawn, redone in the late 1980s for Indiana-Michigan Conference of the Mennonite Church, and now as The Exchange.

The plan to develop The Exchange started several years ago by getting input from key people downtown.  There was affirmation for the continued development of downtown Goshen second floor space for commercial use in a collaborative way.  The Exchange name ties in with history and conveys how entrepreneurs approach business today.  It’s appropriate for this space and business model.

The location is where development is taking place with quality retail, restaurants, entertainment, and other offices within a block.  With the Goshen Theater recently completing restoration, the area is even more desirable and accessibility to The Exchange should increase.  It’s an exciting time to be in downtown Goshen.

The Goshen News published an article in their “Hidden Places” feature in January 2013 that gives more history of the abandoned third floor.  You can read more about that at.